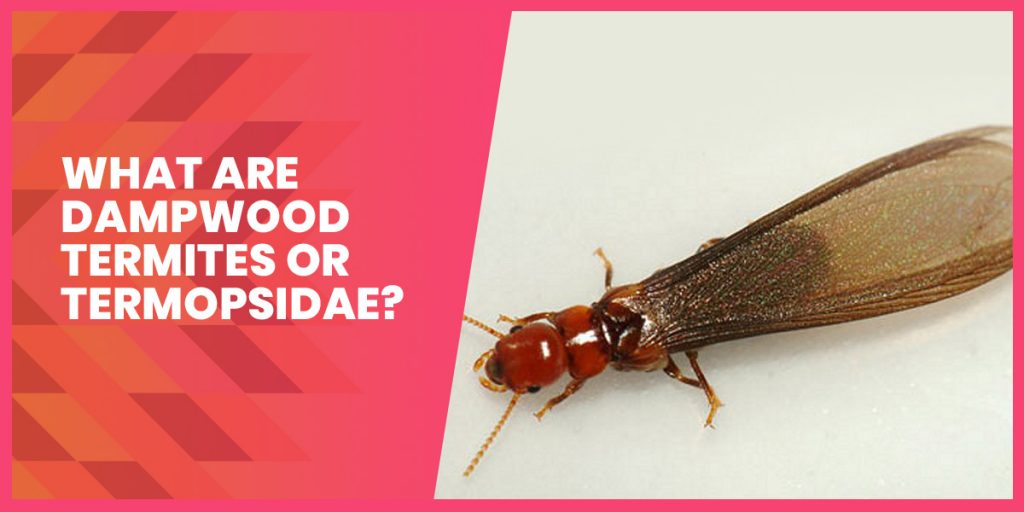 Based on their name, dampwood termites are found in cold, wet, decaying wood or anything organic. Wood archnemesis is termites and any wood untreated is susceptible to infestation, but dampwood termites do more damage than regular termites. Dampwood termites are also moved from one area to another through shipment of wood and timber which can infect other structures, which makes it all the more important to check all materials before installing them into buildings and houses. Your fences, lawn furniture, leaves, and other organic items found in your backyard can also fall victim to these larger termites. They can cause more devastation than any of the other species.

How do I get dampwood termites?

These species thrives in any organic matter that has moisture or is connected to the ground. Lumber, logs that have fallen on the ground, tree stumps, your waterlogged wooden chest with books that is lying at one corner of your basement, these are things that are sure to attract dampwood termites. If you have a leaky drain pipe that compromises a part of your house’s internal structure, this should also be a cause of alarm as it may also become infected by dampwood termites. They are also called rotten wood termites because of their diet and effect. Since they only attack deadwood that is wet and has fallen, they also contribute to its rotting stage. It is also normal for mold to be present where the dampwood termite is because they share the same desire for a wet and high mixture environment.

These termites look similar to any of the drywood termites species and dry termite species after they hatched from their eggs. They too do not have any sex but they are able to increase their size until they reach adulthood. They also live in termite colonies that have the same caste system. They have workers, soldiers, and reproductive termites or semi-mature termites. These dampwood termites are much larger than any of the other termites and the pacific dampwood termites is the largest of the species. Instead of worker termites, dampwood termites have swarmers which are winged and can go as long as 25mm up to their wings. The soldiers are 5mm shorter as well as their immature termites.

What should I look for when checking for dampwood termites

The dampwood termites are very tolerant of harsh high moisture, like the Florida dampwood termites for example. They are most common near beaches and ocean water and may also infest logs buried in the soil. Unlike their drywood termites cousins, they do not create tunnels or shelter tubes and mounds as the subterranean termites except the desert damp wood termites like Nevada dampwood. Their main goal is to keep their colony safe is to be completely invisible, which is why their damage is much harder to spot. Their effect weakens structures and their support beams and more often very devastating. Much like tooth decay, people find out that they need to take action when it is way too late and the damage will lead to costly solutions and repairs.

They are able to do this by covering the entry holes with fecal pellets. When inspecting for dampwood termites make sure to take a closer look at the wood in a high moisture area as their damage may not be easily visible since there are no other signs outside the infestation. The inside of these dampwood termites colonies is smooth and airtight as they use their fecal pellets to create a seal to maintain the moisture content inside the gallery. The walls in these chambers are smooth as if it was sanded because they eat across the grain of both summer and springwood. The pellets work as soil as wells since there is no soil found inside, they are stuck to the wet walls of the gallery chambers or they may be accumulated at the bottom to be expelled and removed out of the gallery.

Pest Control advice: How to prevent the infestation from dampwood termites

Rooms or locations with high moisture content, organic matter that rests directly on the ground, or water-damaged items from floods or leaks are bound to attract these dampwood termites. They are not subterranean termites and do not need soil and contact to the ground, all they need is a wet environment with a lot of food to feed their colony with. If you are looking to termite-proof your home, make sure that all sources of moisture are eliminated, check for leaks in the basement, and rooms with water like the toilet and bathroom. It is always a good practice to make sure you have devices in place that will remove the excess moisture in the air in rooms that accumulate excessive moisture, make sure these areas are well ventilated to let the air dry out. If you use firewood, do not store them near areas that rest against wood used as walls or support beams, or any part of the structure of the house. They can be placed at least 10 meters away from wood that you think might get infected.

Termite Control: How to get rid of dampwood termites

When you have determined that you have a dampwood termite infestation your best control and termite control. Leave the job to the professionals because they will make sure you have the right treatment plan to rid your house or structure of termites completely. These professionals will customize each plan of attack according to the blueprint, moisture content in each location, and degree of dampwood termite infestation to make sure at the end of the treatment, your home is termite-free.

Just like the subterranean termites, replacement, or changes in the damaged areas may be necessary, make sure to ask the professional the best way to prevent dampwood termite from coming back. There are wood treatments out there available to protect your houses with, but moisture control is always first before chemical control. As they say, prevention is always better than cure.