Termite Larvae and Everything You Need to Know 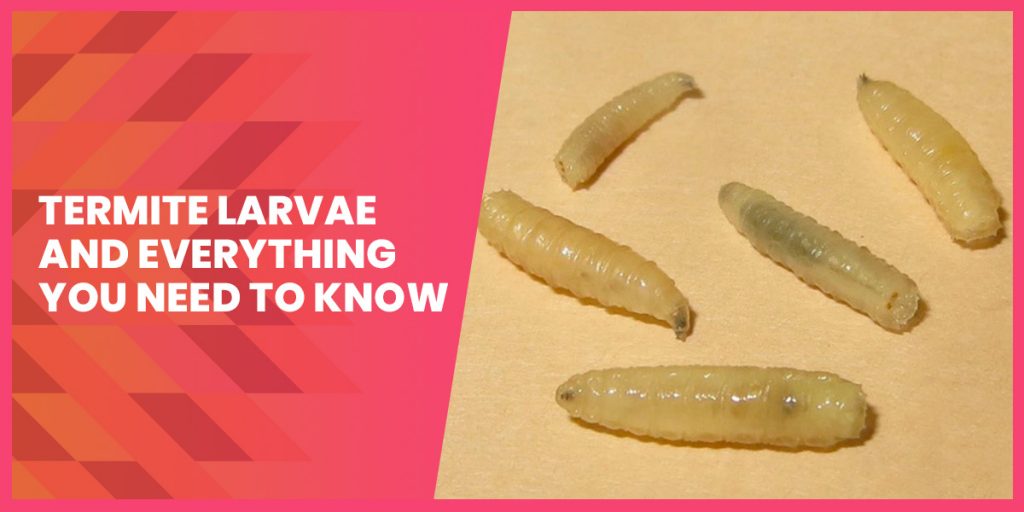 Termite Larvae and Everything You Need to Know

Nothing ruins a great home than a termite infestation. They may have a purpose in maintaining balance in the environment by chewing down dead wood, but when the deadwood they chew on is the structure that holds your house together, now we have a problem. Termites in the house ruin everything from your walls, ceilings, furniture, and even your beloved books and family portraits. They feed on anything made of wood and any organic matter which includes paper, doors, shelves, boxes, your food in the pantry, and a lot more.

Termites are responsible for over $1.5 billion in structural damage each year in the United States alone, but the worldwide damage cost will be difficult to determine. They do not just damage the house, in some areas, as long as there are enough moisture and organic matter, termites will multiply and termite larvae will continue to grow.

Read on and learn more about termites, termite larvae, what happens when they grow and become adult termites, and how to get rid of termite infestation.

Colonies are found everywhere except Antarctica because they are unable to inhibit cold habitats because of their soft white outer shell that does little to protect them in harsher environments. There is a diversity in species and there are over 3000 classified and the species varies from continent to continent.

Termites look like ants and they have been thought of as the winged white ants, but they are actually closely related cockroaches, the wood-eating part of the family. Studies have emerged stating that they have evolved from cockroaches and have been around during the early cretaceous era as research reveals. They may be in the roach family but their colonies are similar to bees and wasps as they have a caste system where there are workers and soldiers. These termites are sterile and do not contribute to the reproduction of the colony. The reproduction is a job for the fertile adult kings which are older nymphs, and a queen or queens depending on the size of the colony.

It starts from termite eggs, countless of termite eggs from the king and queen of the colony. These newly hatched termite larvae that become either a worker, a soldier, or a reproductive termite. These changes or assignments of the baby termites happen when the larvae are exposed to pheromones and greatly depend on the environment and the temperature around them. The termite larvae will change to either of these three, but a bigger number will be workers than soldiers. The baby termites or larvae termite grow from one stage to another and some become adults and grow to become nymphs.

They make up the biggest number in the colony because they provide and take care of everyone in it. What do they look like? They are the usual white termites you first see when you peek into a termite colony and they are much smaller than the soldier termites or the reproductive termites. They have a white exoskeleton, their body is soft, and they are wingless. They do not mature and they do not reproduce. The worker termites job is to provide for the termite colony which includes feeding the unhatched eggs and making sure that the temperature is just right. They do this by digesting cellulose that is found in the wood they infest which is an effective way to recycle what they have foraged. The workers are the ones responsible for looking for food and making the tunnels and the termite colony structure and they are the ones responsible for making the damage to your home.

They are important as any part of the colony because they make sure that the next generation is well cared for which gives room for the colony to grow bigger and bigger.

These termites look suited to their jobs. They have tough mandibles and a dark hard head that they use to protect the termite colonies from intruders like ants. These soldier termites are able to sacrifice their bodies to make sure that the intruders are not able to enter their colonies by blocking the entrance with their bodies which rupture blocking the entrance. They are also well equipped for the job because soldier termites secrete toxins from their head to ward off their enemies. Their number is a small fraction that is of the worker termites, but they are also wingless like them. They are also fed and cared for by the worker termite since they are unable to feed themselves.

They have an alarm system that they utilize to defend their territory that is released when there is an intruder trying to infiltrate may it be other insects or pathogens. Soldiers guarding the gate also vibrate and bang their heads to call and recruit other soldiers to assist in the defense.

They are fewer than the soldier termites and there are at least 10 reproductive termites or kings that mate with the queen at a time. Termite colonies, like ants, will only have one queen but several kings; there are chances that bigger colonies may have more than two queens at a time, but kings should always be ready to fertilize eggs as she lays them.

The queen may lay up to a dozen eggs as the colony begins but the number increases as the colony grows older. More mature queens can lay over 30,000 eggs in a day as their abdomens are more distended and have more capacity. Unlike the queen, the king does not grow as much after the initial mating as he mates with her throughout his life. The replacement of the queen begins with the king secreting hormones that will encourage the colony to produce a new queen. This only takes place when the queen is no longer able to produce eggs or is absent from the colony.  Besides the king and queen, there are also termite larvae that do not become a worker or a soldier but become a supplemental adult reproduction termite. They are the ones to replace a king or queen when they are no longer able to attend to their duties or would need additional queens since the colony has gotten bigger. Queens are able to reproduce sexually through mating or asexually, and they can also produce another queen to replace them, but kings only produce other workers.

Controlling the infestation and how to get rid termites

There is no time to waste when you find out that you have termites because these termites may do significant damage to your property if left untreated. How to get rid of termites? This is a job for professionals, and there is no better way to completely get rid of them but to get the right people to do it for you. They will determine the center of the infestation and its extent and determine the plan of attack. These professionals know what to look for, what termites look like, and can rid your home of adult and termite larvae to make sure none survives. Once the job is done, they will give you the complete details and it is always best to ask about the integrity of the structures.