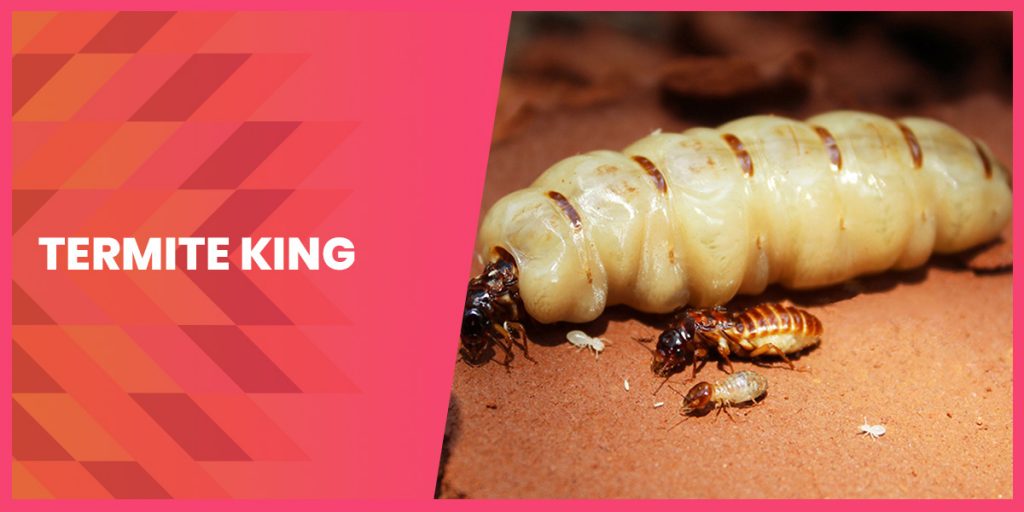 Termites are social insects. Like humans, they have their specific castes. It is composed of workers, soldiers, and reproductives. They appear in tropical environments. They can also live anywhere as long as the weather is not freezing. In this article, let us discover how termites work.

What is Termite King

The king is one of the valuable personalities in the colony, next to the Queen of termite. The termite King spends its life underground. Termites also have social classes. It is reproductive, and the soldiers and worker termites.

The king and queen are reproductives. The termite queen is responsible for producing termites and alates. Alates are mature female and male termites. As they develop their wings, they can start their own colonies. The soldiers and workers are immature termites. The primary goal of soldiers is to defend the termite species. While the workers take good care of the termite colony.

The royalty is darker in color. It usually lives for one to three years. The unbelievable fact here is, only the queen and king have eyes. The other members of the colony use moisture and scent to navigate.

What is the Role of the Termite King

Aside from reproduction, the king plays an essential role in the colony. As they develop their wings, they participate in the social swirl, known as swarming. They will look for the queen termite in this stage. It is the start of building a territory. Here are the roles of the queens and kings.

Regardless of the species, the kings and queens look for a cavity in the woods. Termites prefer having moistened places for their nest. It is where they build their colony. They will create an enclosure that no one can disturb them. It is where they start the mating. Studies show that the king termite stays close with the queen. The reason behind this is that the queen supplies sperm to the queen periodically.

During the first years, king termite will help in maintaining the nest. The termites queen will produce workers and soldiers. And the queen termites will distribute the work. The soldiers and the workers will take over the housekeeping and caretaking responsibilities. They will bring food to keep the kings and queens living.

To maintain the social status of the colony, the royal couple release pheromones. It is a chemical that prevents the other termites from having a reproductive system. The kings and the queens work together to maintain the balance in the colony.

The primary role of the king termite is to supply eggs to the queen for reproduction. This kind of phenomenon has been subject to research. It appears that no matter how good the queen, there will always be a need for a king in the colony. The colony will not work without a king.

People have problems locating the mature queen and king. The reason behind this is, they are hiding deep within the colony. But, if we pay attention to the alates flying around the yards, or outdoor buildings, it can be a sign. You might be in a situation where the termites are slowly taking over your home.

Do not wait for the worst-case scenario. If you think that termites live in your home, contact a pest professional immediately. The professionals investigate your home and take the roots of your termite problem.

Termites can become king and queen. However, there will be chaos in the colony if all termites are queen and king. That is why the selected king and queen produce pheromones. It is their way of regulating the termites. They also classify them based on their needs, that’s where soldiers and workers come from. However, if the king and queen die, the workers will generate replacement reproductives. It is to continue the life cycle of the termites.

Can I remove the Termites on my Own?

You can do a do-it-yourself procedure. You can buy some insecticides and put it in the infested area. However, some people miss other termites. It is the queen. If this happens, termites will keep on infesting your home and build their colony. It would be best if you try to contact a professional pest controller.

There are things that termites want. It is to build their own colony. That is why the king and queen’s primary goal is to look for undisturbed places and without sunlight. It is for them to reproduce freely. We usually have it in our backyard or storage rooms. There are also instances that improper drainage and leaky pipes attract termites. The reduced airflow will make moisture that the termites like.