An imported type, Formosan subterranean termites come from Asia and live mainly in the South in the U.S. It has been transported worldwide from its native range in southern China to Formosa and Japan too. The Formosan subterranean termite is very damaging to property and can destroy your home much more quickly than other varieties. They are known scientifically as Coptotermes formosanus Shiraki, an invasive species of termite.

Formosan termites are a recent invader from Asia (Formosa, an older name for Taiwan). Formosan subterranean termite has spread in the United States, primarily in the southern states. They’ve also hit Hawaii and, to a lesser extent California. However, they can’t spread quickly beyond this because they cannot hatch their eggs if the temperature is too low.

They are subterranean (meaning they live in colonies underground and tunnel from there into your house). Formosan subterranean termite or Coptotermes formosanus Shiraki came to the U.S. in the fifties and sixties, primarily to port cities where they were transported by boat.

They spread very quickly because they can establish colonies in various wooden garden products (and even potted plants). Sometimes they’ve also caused power outages by eating through power cables. 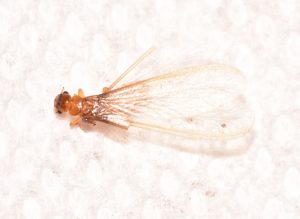 The Formosan subterranean termite is particularly damaging to property. While their colonies start small, they grow to be much bigger than those of termites native to the U.S. They can range for several hundred feet underground, meaning that one colony could attack several houses in a neighborhood. They also eat wood at a faster rate than other kinds of termites, and they will eat a lot of other random things that other termites usually don’t (boats, for example).

Formosan termites are known with three distinct castes or forms:

The Formosan workers look similar to the workers of other insect groups, the winged alates and termite soldiers are the ones that become useful in providing the correct identification about their species.

It is not easy to identify or classify the difference between a Formosan subterranean termite and other termite groups. If you have doubts about it, you might contact a pest management expert to help you with a more accurate classification.

To give you an idea, a Formosan soldier is oblong, and like the subterranean termites, they have rectangular heads. The Formosan soldier is more aggressive, especially in defending their nest than other termite soldiers. When these types of termite species are being disturbed, the soldiers produce a white liquid for defense.

The swarmers or alates identified as a yellow-brown insect with 1/2 inch in length. They also have a thick covering with small hairs growing on their transparent wings.

How To Get Rid Of Formosan Subterranean Termites?

Formosan termites or Coptotermes formosanus commonly see in the wood structure of your home that touches the soil. Using a mud tube, they travel from the ground to the wood. Their common entrance is inside your house with unsealed cracks and joints. Their aerial colonies infested roofs also and other parts high above the ground. Formosan subterranean termites fly to look for wood, especially the moist one, and are located in areas where excessive soil moisture and water puddles are running in the exterior.

The same things you would do to get rid of regular termites (discussed throughout this site) immediately you spot signs of infestation of Formosan termites. All of the methods, such as bait, nematodes, liquid treatment, etc., will also work on the Formosan termite species. You’ll need to call out a professional exterminator and have them inspect the house, and then have them treat it. There are a couple of extra pointers I’d give if you find out you’ve got the Formosan variety:

1) Let all your neighbors know about this subterranean species. Unlike with regular termite species, the colony may not just be at your house – it may be a single, large colony that could be damaging its property.

2) Act fast to get rid of these termite species. With regular termites, you’ve got years before they do any real damage. That’s true to some extent with the Formosan kind – it takes them several years before a colony gets big enough to do anything. But once it is that big, the damage comes fast – in months, not years. And you don’t have any way of knowing whether the colony is a small one or a big one.

3) If your neighbors are stubborn and won’t do anything, consider using bait treatment. The termites will spread it throughout their single colony (so you can attack across your property line, and don’t have to worry about only killing part of the colony).

4) Don’t just check your house. And don’t just check wood. They’re known to eat through all kinds of things, so look for damage anywhere on your property.

How Serious Are Formosan Termites?

Formosan termites are considered one of the most destructive termites in the U.S. That’s why they are a significant and serious concern for many residents. When they multiply, they continue to destroy the wood structures of your home.

Some termite workers do not eat wood quicker compared to Subterranean termite workers. But they consume more food source because the colony and size of a termite are bigger compared to others. The Formosan termite nest contains millions of this kind of insects. It will be hard to conduct infestation without help from pest control experts.

If you are a homeowner and planning to do a renovation, there is a possibility that you will discover some severe termite damage. When they consumed your wood, the other parts of your structure also becomes sag.

During early summer and late springs, the Formosan colonies produce swarms of winged females and males. They are called reproductives. They are 15 mm in length, including the wings. You can differentiate it with winged ants because of their equal length front, hind wings, and straight antennae.

What is the best treatment for Formosan termites?

Make sure to get the most dependable termite control expert and pest management team in the industry. The continuous protection plan is designed for construction home types. It is proven effective by a lot of people already.

This plan is based on the layout of your property and the degree of infestation done by termites. The expert or the pest management team will create an idea on how to treat the insects which are tailored well for your home.

What is the issue with the Formosan termites in the US?

A Formosan termite natively came from East Asia and introduced to the United States during the year 1940. According to some people, Formosan termites entered the country through various cities, especially in South Carolina and North Carolina, which resulted in varying concentrations. The population of termites had spread throughout the U.S. wood cargo shipments and other goods. Many scientists believe that this termite can be populated through an infested and wooden railroad stakes.

Formosan termites choose to live in warm climates, and you can mostly see them in dense areas of the American South. They are popularly known as Formosan subterranean termite and commonly found in the United States across the Southern part in the U.S.A. These states included Florida, Alabama, Georgia, California, Hawaii Louisiana, South Carolina, North Carolina, Tennessee, and Texas. But they can also be found in smaller areas with less population in the far north of the Canadian border.