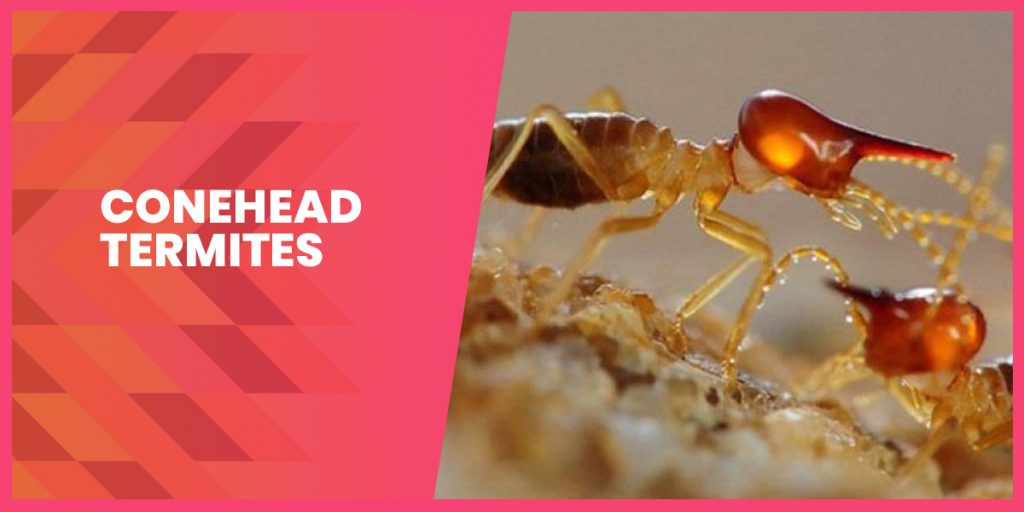 What is a Conehead Termite?

Conehead termite or called nasutitermes corniger is a dark, cone-shaped head termite, and the name refers to termite soldiers. It is part of a big portion of the total conehead termite colony at about 20-30%. For subterranean and drywood colonies, only 1-2% of them are soldiers. Another distinguishable feature of a conehead termite is by the look of their tunnels. Subterraneans build mud tunnels, while conehead termite makes more extensive and much more vast tunnels than the Subterraneans. Another way to distinguish it from other species is by how their nest looks. Their nest is found in the open sites such as in a tree, where it looks like a large, dark-brown, round, or oval-shaped ball.

The conehead termites are home, and property invaders found in Florida in 2001 and are now present in the southern region of the state. The conehead termite belongs to drywood termite species and native residence of the Caribbean and the tropical countries of Central America.

The conehead termite colony stays hidden for several years from when the colony starts. But as it ages and matures, nests will start appearing above the ground. Open ground, constructed nests are found in trees, shrubs, or on buildings.

Conehead termites are attracted to anything that contains cellulose. They commonly infest and devour trees, live or dead shrubs, bushes, roots, and at the same time on structures made of lumber, furniture, fence posts, rails, and paper products. They live in nests made of mud and other materials above the ground, specifically large mud nests that are often seen in trees.

When the colony becomes mature, it contains both reproductive queens and males. It will form alates that will be part of spreading colonies as they develop wings, fly from the nests, mate, and find new areas to start new colonies.

In early 2000, the Florida Department of Agriculture with the Pest Management Association and Certified Pest Control Operators of Florida worked together to create reliable control methods that pest-control people can utilize. They requested for funds to be used for agriculture and consumer services, training and subsidies for property owners who can’t afford the pest treatment.

Conehead termites appeared in Dania Beach of Florida 14 years ago, and experts were able to contain the spread of the species but not until this year as they started appearing in several properties. They nestled on the trees where the naked eye can’t see them. To prevent it from spreading, experts look for areas that they can be thriving and destroy their nests as one of the methods to eradicate them.

These dark-brown pointy heads are responsible for the estimated $40 billion economic losses that are allotted to termites yearly. Their habitats have spread to homes and huge numbers of plants and animals. For non-experts, it is impossible to see the evidence of termites, but some homeowners can identify a possible termite activity by being watchful in and around the home.

How do you get rid of termites?

You may wish termites didn’t live in your warm and humid climate, and so, you are eating at your homes and leaving billions of dollars worth of damage annually. Unfortunately, they do, and you must know how to deal with them—asking help from professionals to fight against this pest.

Signs of an Infestation

Among the signs of a conehead termite infestation is when you start seeing termite nests, extensive and continuous termite cones connecting their nest to feeding sites, the appearance of oddly shaped conehead termite soldiers, and many more soldiers in the nest compared to other castes of the termite colony.

Termite prevention starts with a thorough inspection with the help of a pest control expert. Given the result of the inspection, a pest control expert can come up with the right strategy from removing the visible nests to treating trees, stumps, structures, mud tubes, and other sites where conehead termites can be found. The prevention measures will also include methods that will prevent other termite species.

Pest management and treatment depends on the severity of the damage. If it is small, you can deal it with yourself using these methods.

Conehead termites or nasutitermes corniger can wreak large structures and landscapes, which can leave enormous damage. They are aggressive pests of crops, wooden structures, and forests in several countries in central and South America. Studying this species of termite provides significant insight into their origin in Florida, their ecological progression, and colonization. The discoveries made from these studies add to the understanding and behavior of this species, which is an integral part of improving how to control them.

Infestations can be detected easily in occupied sites and can be treated correctly if the species are identified correctly, and nests are found. After treatment, regular inspections should be implemented as young colonies might be hiding inside the wood for years. Hence, if you suspect that conehead termites are beginning to invade your neighborhood, you should immediately call for professional help.